Two points stand out in Patrick White’s rant about the Australian psyche from the Prodigal Son. “The Great Australian Emptiness, in which the mind is the least of possessions…” and “muscles prevail…” Growing up during the 80s and 90s in this “sporting nation” I can whole heartedly relate to these sentiments. Being an uncoordinated runt of a kid who enjoyed mental gymnastics rather than athletic competition I can also recall feeling very alienated and being almost ashamed of my traits. An old school friend recently introduced me to his girlfriend as such; “This is my mate Nige from school. He was smart, but he acted dumb and hung around with us”. So now here I am in my early 40s, stuck in a mind numbingly dull dead-end job, performing monotonous manual labour, accumulating aching joints and muscles and wondering how long my body will hold out. Fortunately, I have dusted off my old brain and am now nearing the end of my Bachelor of Arts.

Patrick White’s words reminded me of the first time I saw stand up comedian Steve Hughes and laughed so hard at his revelations on the Aussie obsession with sporting prowess. In one section Steve explained how when being asked why he didn’t want to play rugby league as a kid he replied “because it fucken hurts!” My thoughts exactly! But growing up in Sydney you could never say that. You had to be tough; you had to be interested in this game and be prepared to suffer personal injury in order to demonstrate your blokeyness. 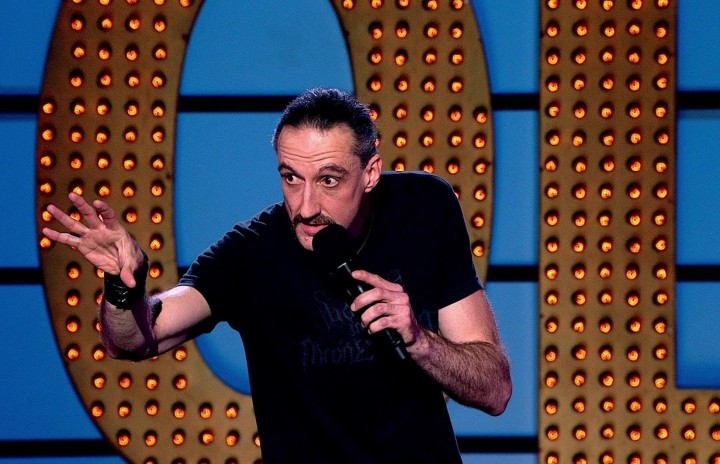 Returning to Australia after several years living in Europe, Steve was asked if he missed his homeland. His “no” reply was met with great curiosity, to which he replied “because I don’t like sport that much”. I’m sure I laughed twice as hard as my athletic mates. “Only in Australia can the sport be on both the front and back pages of the newspaper” he said. This act was inspirational for me; this bloke was saying stuff I had always mused over but never been able to put into words.

I don’t hate sport, but it holds very little of my attention. I am much more interested in film, books, philosophy, and theatre and of course stand up comedy. My sporty mates are mine by default of geography. We grew up together and have much in common. However, my geekiness and their competitive sportiness is definitely a divergence. They do not wish to discuss Akira Kurosawa or Plato and I do not wish to hold on to a ball and run full throttle at one of them so that they may smash their shoulder into my midsection and violently slam me into the turf.

Australia does seem to have a preference for sporting conquest over intellectual achievement. I have not lived anywhere else so I can only go on what I hear from other people who have, and imagine that these tales of far off places where the cerebral is celebrated actually exist. Of course, we have pockets of it here in Australia, but the bookish and artistic types are certainly kept in the shadow of the great sporting heroes. I don’t think we mind so much though, we prefer peace and quiet in order to nurture our creativity.